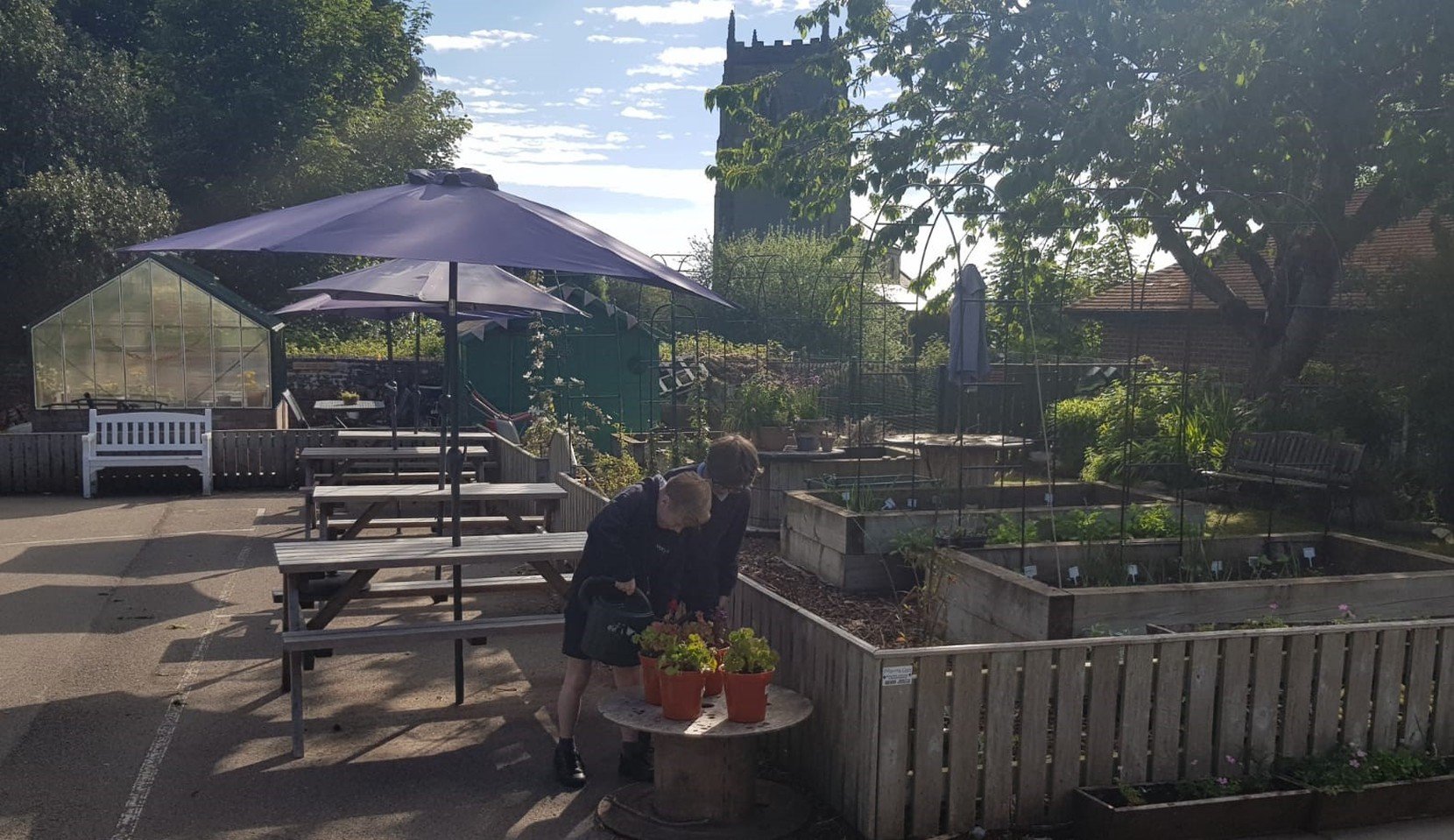 Mr Meade prepares the Year 3/4 with some first-class football drills on a Thursday lunchtime.

Here are a few snaps of our talented Rugby players training with Mrs Bray and Mr Meade.

Mr Saltonstall took the Year 6 children for a tournament at Hymers. The children played very well and, despite conceding only two goals in four games, ran out 3rd of 5 teams. Let's try and score a few more next time! Thank you to the children, parents and Mr Saltonstall for taking them down and for making the experience possible.

There was a great turn out in the House Captains' Cross Country, organised and open to Key Stage 2. All of the House colours competed and with various winners from Red, Yellow, Green & Blue.The Year 3/4 Red team were victorious and in Year 5/6, it was the Green team who triumphed. When the total scores were added up, the overall winners were...the GREEN TEAM! A massive thank you to all those who took part, to the adults who helped make it happen and the House Captains for organising the event.

Chess club meets every Monday lunchtime in the Wren's classroom. In the Autumn Term the club will be just for those that know how to play. In the spring term there will be a beginners club where the children can learn how to play - this will be open to all - numbers permitting!

On Thursday 9th March, Nafferton Primary School competed in the Driffield Area Tag Rugby Festival. It was a very successful evening with both sides competing very well and demonstrating great teamwork. After some excellent play both attacking and defensively, Nafferton beat Hutton Cranswick 6-5, in a very tight final to become champions. They have now qualified for the East Riding School Partnership finals at Beverley.

Following their recent success at the East Riding finals, Nafferton Primary’s Boys’ U11 Hockey Team took their place at the England Hockey In2Hockey tournament for schools in the North East England finals on Tuesday 7th March at St Peter’s School in York. A mixture of large private and state schools awaited the team, as they attended the North East Finals for the first time in 4 years. The first game of the day saw them face Yarm School from North Yorkshire. A well-organised effort by the team saw several efforts on the Yarm goal only to be thwarted by their defense and goalkeeper. The Nafferton defense of Barker & Lee, ably supported by Fakiolas in goal, also saw off any Yarm attacks with confidence and composure. Despite a number of close efforts on goal, the team couldn’t quite find a way through, leaving the final score 0-0. The second game brought Hill House from Doncaster as the opposition. This time, a team growing in confidence took to the field and really showed their ability as they took the match to their South Yorkshire opponents. After several attacks it started to look as though nothing was going to go their way, but eventually Nafferton broke the deadlock from a Needham penalty corner before additional goals from Hancock and Barker left the scoreline comfortably in Nafferton’s favour with a final score of 3-0. Again, the last line of defense stood solid as Fakiolas kicked, cleared and saved several efforts on his goal. In their final group game, the team needed a win against Giggleswick School in Settle to leave them challenging for top spot. Again, it was a very confident attacking performance by the team but despite numerous efforts on goal, Nafferton couldn’t quite find a way through. Eventually, however, Porter on the wing found space to dribble at the defense to earn a penalty corner which captain Needham dispatched with accuracy into the corner. Again, excellent defending and ‘keeping at the back kept all opposition efforts out of the Nafferton goal and a final score of 1-0 left the team with a play-of place at the very least. After all games had been played, Nafferton emerged victorious in their group and into the final against Ashville College of Harrogate, who had beaten Nafferton’s local rivals Martongate into 3rd place in their group. A tense, highly competitive and closely fought final saw both teams build a number of excellent attacks and finding both goal keepers in excellent form! Lee tracked and tackled strongly to prove that the girls’ places where absolutely well-deserved in the team, while Fakiolas refused to let anything past into his goal. After a number of turn-overs won back by Hubbard and Porter on the wings, the team again managed to earn a string of penalty corners to pile the pressure on to the Ashville goal. After several well-worked options, Barker took the strike while Smith’s pace on the post meant he added just the right deflection to squeeze the ball between the ‘keeper’s legs. 1-0. Needham, Hancock and Barker’s hard work down the middle meant Nafferton could keep the ball in the teams control before a very welcome final whistle left Nafferton with 3wins and 1 draw from their 4 games, 5 goals scored, 0 goals conceded and, most impressively, Champion boys’ hockey team in the North East of England. Onwards and Upwards to the North of England finals at Leeds University in two weeks’ time. A huge thankyou from Mr Saltonstall and all of the players to the parents for their support and to Rafters Electrical Ltd for their incredibly generous sponsorship of their new playing kit.

On Thursday 9th February took part in the Driffield Area Girls' Tag Rugby Festival. Despite the cold and snowy weather, it was a fantastic evening with the girls showing excellent teamwork and skill. Three victories and one draw resulted in them being crowned champions. Well done girls!

We use necessary cookies to make our site work. We'd also like to set optional analytics cookies to help us improve it. We won't set optional cookies unless you enable them. Using this tool will set a cookie on your device to remember your preferences.

Necessary cookies enable core functionality such as security, network management, and accessibility. You may disable these by changing your browser settings, but this may affect how the website functions.